My article on how young Icelandic women are using social media to protest against sexual violence and rape culture was published by Al Jazera two days ago. It’s an exciting initiative that hasn’t stopped yet and has created considerable media coverage of the issue. I suspect that the record turnout for Saturday’s Slut Walk (Drusluganga) was partly to do with the women’s actions and the ensuing publicity. 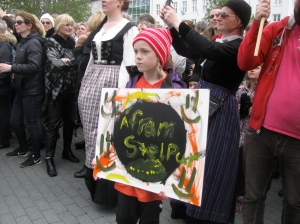 The photos above were part of an action on June 19, when Iceland celebrated 100 years of women’s suffrage, and was organized by a group called Activism against Rape Culture which had arisen out of the Facebook group Beauty Tips. The organizers were appalled that the Icelandic government was celebrating the centenary with virtually no mention of the battles women still face, such as lower wages. The placard held by the young girl translates as “Onwards, women” and is the title of a song which was originally composed for the 1975 women’s strike but was sung on a number of occasions on June 19 this year too.

Iceland’s foreign minister, Gunnar Bragi Sveinsson, has just realized that some people from some countries are somewhat contemptuous of Iceland because of its whaling activities. Well, maybe contemptuous is a bit strong but Iceland is viewed somewhat negatively by some. He has just said that Iceland should consider cutting down on its whaling activities to appease international society.

What he doesn’t realize is that Iceland will have to stop ALL of its whaling activities if it is to be regarded positively. Reducing whaling is not enough – it has to stop completely. And that goes for both minke whales and fin whales, though international attention is mainly focused on the latter.

I recently wrote about an aluminium plant that some people want to build in northwest Iceland at Hafurstadir, near the village of Blonduous. Since then things have moved on and a letter of intent (or some such agreement) was signed by Klappir Development, the Icelandic company involved, and Chinese company NFC. Quite rightly, a lot of discussion has ensued about where the power for the plant will come from and if enough power will be available (answer: theoretically potentially yes, practically definitely not).

But there are other issues too. The plant is intended to have a capacity of 120,000 tonnes a year, but in fact all the Icelandic plants that have started small, or have originally been designed to have a small capacity like the half-built plant at Helguvik, have since been enlarged because it’s much more economic to run a large plant than a small plant. So it’s not just a case of providing initial energy as it’s likely that more energy will be needed for future expansion.

Proponents of heavy industry always point to the jobs that will be provided both in construction and operation. But at the new geothermal plant at Theistareykir where construction has just started in the north of Iceland, the builders have had to import/employ a team of Polish builders because no one in Iceland wanted to do it. The situation is likely to be the same here.

Finally, energy now costs more than it used to for large-scale users, and the low market price of aluminium at the moment would mean that the cost of electricity would be prohibitive.

Well, the first two fin whales have been brought back to the whaling station in Hvalfjordur, Iceland. One of the boats has already headed out to sea again. And as of June 25, 14 minke whales had been caught, though the meat from the first one was discarded due to the strike by veterinarians. Meanwhile, the boat that is carrying Icelandic fin whale meat to Japan, Winter Bay, is moored off the coast of Norway while sea ice along a possible sea route is being investigated.

The global campaigning organization, Avaaz, set up a petition last week to try and stop the boat from leaving port. The boat is sailing under the flag of St Kitts and Nevis, and Avaaz want the nation to remove its flag from the ship as that will mean the boat can’t leave port. At the time of writing, almost 850,000 signatures have been collected.

In Iceland, protestors intend to use drones to follow the whaling boats.

UPDATE: The boat finally left Tromsö last night, August 1, after being moored for 5 weeks. It is going to sail the so-called Northeast passage along the northern edge of Russia, east through the Arctic Ocean and then down to Osaka in Japan. The route is shorter than others that go between Europe and Asia but is prone to becoming blocked by sea ice. So maybe nature will stop the whale meat in its tracks.

UPDATE: The boat arrived in Japan on August 30.