The 2016 Icelandic national election, which took place yesterday, has produced a difficult position in terms of forming a new government. The conservative Independent Party, led by Bjarni Benediktsson who was named in the Panama Papers scandal, got 29% of the vote and 21 MPs out of a total of 63. But neither of the next most popular parties,  the Left-Greens and the Pirates, want to work with the IP. They both got 10 MPS. The foreign press have been particularly interested in the Pirate Party as until the last two weeks or so it had been leading opinion polls (if that means anything) for the last 18 months. But as Icelanders know, much of the Pirate’s support comes from young people, and young people are less likely to vote than others. Still, the Pirates have managed to go from 3 to 10 MPs, which is very good.

For two weeks prior to the elections, the Pirates had also been talking with the three other Opposition parties about having a joint plan for working together after the election.

The new government will be made up of seven different parties, one of which – Vidreisn – is new and is essentially a splinter group of the IP except that Vidreisn is pro the EU. It did well, with 7 MPs in, but has been reluctant to become involved with the Pirate coalition.  Without Vidreisn, the Pirate coalition is doomed to failure, as the Social Democrats – the party that pushed for Iceland’s accession to the EU – did abysmally, with only 3 MPs.

From what our most recent Prime Minister from the Progressive Party said this morning, before he handed in his resignation to the President, it seems that his party is in the midst of internal strife so is unlikely to be in a position of being capable of running the country, even if asked. The situation between Sigmundur David Gunnlaugsson, who was PM until early April when he left because of Wintris, and Sigurdur Ingi Johannsson, who SDG appointed as his replacement, has been very strained since SDG lost his position to SIJ as Chair of the Progressive Party a few weeks ago.

Whatever happens, time is of the essence because a new Budget has to be agreed before the end of the year.

The new Althingi will be made up of 30 women and 33 men; never before has the percentage of women been so high at the start of the electoral term. And of the 63 members, 31 will be new.

Reykjavik has been awash with foreign journalists because of the elections, but if anyone wants and update as the situation develops, let me know. I promise I won’t write misleading news, like AFP did last night after misinterpreting a figure at the top of the website of the State Radio and Broadcasting Service and calling it Breaking News.

I like the Arctic Circle Gathering. It has now happened for the fourth time in Reykjavik, and takes over most of the impressive Harpa concert and conference centre. Indigenous artists also perform and/or display their art.

This year,  over 2000 participants from about 50 countries attended the three-day event, which is the largest event of its kind. People seem to use the event for networking as well as gaining more knowledge (or disseminating more knowledge) about Arctic matters. Lectures, plenary sessions, seminars and information stands cover a wide range of issues, from economics and investment issues to shipping and renewable energy. There are also sessions organized by a particular country, e.g. Switzerland and the Arctic.

This year I wrote a short piece about the North Atlantic Energy Network (underwater energy cables) for the European environmental news bulletin ENDS Europe, and a longer piece on sustainability and the Arctic for InDepthNews/ International Press Syndicate. Last year I wrote about permafrost and climate change for Al Jazeera. Interestingly, last year there were very few media outlets covering the event, but this year the number seemed to have tripled or even quadrupled (but we were allocated less working space than last year…). Clearly, interest has spread.

There are smaller Arctic Circle forums during the year: in Singapore, Alaska, Greenland and Québec. The latter will be held for the first time December 11-13 and will focus on renewable energy. Québec ranks second to Iceland in the proportion of its energy derived from renewables, in its case hydro. The blurb for the Québec forum includes: Discussions will focus on the sustainable development of northern regions, including Alaska, Greenland as well as northern areas of Norway and Sweden.

Were nuclear weapons ever stored in Iceland?

I’ve just written an article for In-Depth News/International Press Syndicate on whether or not nuclear weapons were ever stored in Iceland. Declassified documents from the US show that the issue came up, and the Navy had requested the construction of an Advanced Underseas Weapons Shop (AUW) for storing nuclear depth bombs in Keflavik. It is stated in the documents that it is now a settled issue that nuclear weapons were never stored in Iceland, but peace activists in Iceland are not so sure, as there have been a number of accounts in the organ of the peace organization to suggest otherwise.

The US military is also thinking about returning to Iceland, according to a strategic document from the Center for Strategic and International Studies that has now apparently been removed from the Net….. Although a shortened version can still be found on another site. 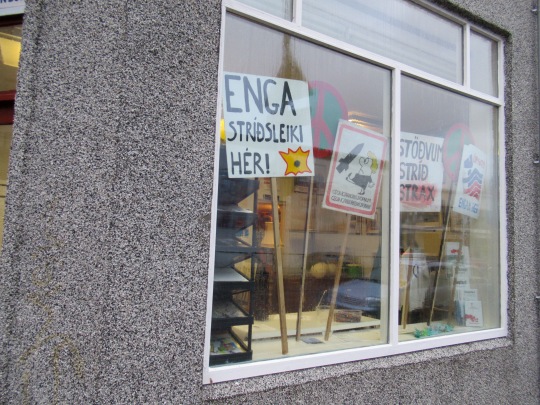